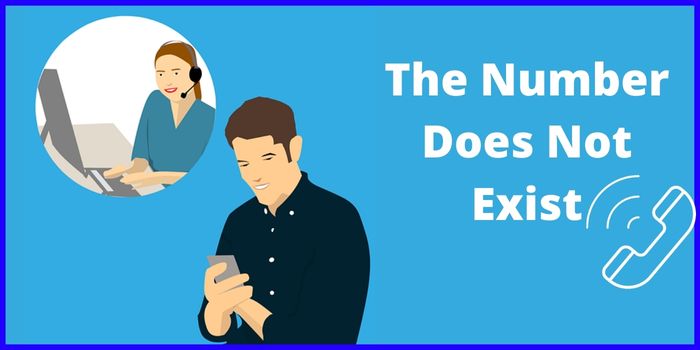 If you dial an incorrect number on your phone, your call will not reach the receiver. Instead of hearing that person’s voice say “Hello,” you’ll hear a recorded message from the mobile operator saying “`This number does not exist.`”

Reasons Why it Says: Sorry This Number Does Not Exist

“This number does not exist” problem rises if you dial an incorrect number on your phone and your call will not reach to the receiver.

If the auto-reply on your mobile phone says the number you dialled is not recognised, it signifies one of the following:

What Does It Represent When A Number Doesn’t Exist?

There is no call service or the number dialed does not exist. Problem: While dialing the proper number, the user is unable to connect. Instead, they are told that the phone number you dial does not exist or that they have not subscribed to the call service.

What Does It Mean When You Text A Person, But The Number Does Not Exist?

In that case, recheck your number, it might be possible that you have mistyped the number or telecom service has been stopped for that number. In both cases, you can able to send any message to the recipient.

Why Does It Not Ring When I Dial A Phone Number?

There are several reasons why your Android phone might not ring when a call is received, like: The volume has been reduced. Do Not Disturb or Airplane mode is enabled on your phone. You’ve enabled call forwarding.

How Can You Make Phone Number Appear As This Number Does Not Exist?

Have you ever received a call from your mobile service providers, such as Airtel, Idea, or vi, but when you called the number back, you received voice message that, sorry, the dialed number does not exist.

Here’s a quick way to do it with your phone number.

It’s a basic diversion tactic that only a few people are aware of.

That’s all you have to do, now you have successfully maked the Number Does Not Exist for your phone number.

If I Dialed Correct Number But Still Messaage Comes “Sorry This Number Does Not Exist” What To Do In That Case?

It’s possible that there’s a problem with the carrier’s network, which is more likely to happen when traveling.

Confirm that your SIM card’s call service has been activated and contacting your carrier if you keep getting the same error message.

Does It Mean They’ve Blocked You Or The Number Doesn’t Exist If You Try To Contact Someone And It Says “The Number You Have Called Has Not Been Recognised”?

There’s a chance they don’t have a signal. Furthermore, it’s possible that they’ve switched their phone to aeroplane mode. There’s also the possibility that their phones are low on battery or turned off. But this doesn’t mean “The Number Does Not Exist” until you get the same message.

Confirm that your SIM card’s call service has been activated and that the local network is operational by contacting your carrier.

Is It Possible For Someone To Use Your Phone Number To SMS Someone Else’s Phone?

Yes, there are several websites where you can just enter the destination address numbers, and the recipient number will get a message from the source number. You may also use it to call any number and display any number on their caller id. But we did not recommend using any of these untrusted websites.