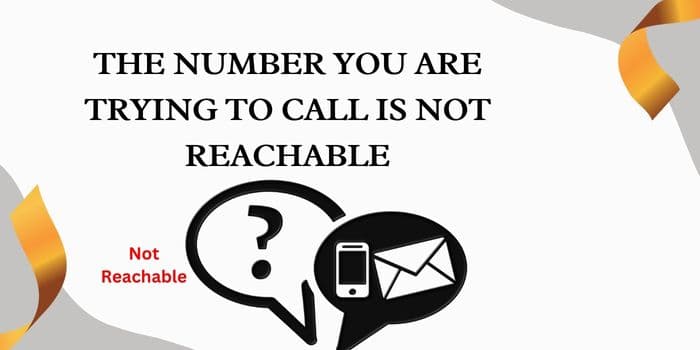 This article will help you to know various reasons of this “The Number You Are Trying To Call Is Not Reachable problem” when dialing someone from the contact list.

When you try to call someone on your mobile phone, you receive a message that the number is unreachable.

The same statement was heard when you repeated calling it again, and you were unable to understand what it main reason for getting this unreachable message.

What Do You Mean By “The Number You Are Trying To Call Is Not Reachable”?

Call status not reachable means that when the network attempted to make a call to the dialed number, but it was unable to connect then this message shows up ” The Number You Are Trying To Call Is Not Reachable”.

In simple terms, The Number You Are Trying To Call Is Not Reachable means that the cellular network was unable to reach the recipient’s phone number because of the phone was switched off or maybe there was poor network coverage.

I’ll discuss all of these things as well as the best way to handle this issue.

Poor Network Issues might be the main reason why you can’t contact or reach the person you’re attempting to call while trying to reach through the phone.

This kind of issue frequently arises in the region where is a lack of network servers.

But there are many other reasons too for facing this Call Is Not Reachable issue, are as follows.

Poor Network Or Signal is the main cause of call not reachable issues. Due of the weak network connectivity in that location, calling the person is going to be difficult.

Phone is Switched OFF

Dialed Number is Blocked You

There might also be the possibility that the person may be blocked your phone number. In that case also you will receive a message like The Number You Are Trying To Call Is Not Reachable.

The provided phone number might not be accurate. The person may given an incorrect phone number. The message “The number you are attempting to call is not reachable” may appear if you dial an incorrect or non-existent number. Reconfirm your number and try again dial to a person with the correct number.

SIM Card May Not Be Inserted Properly

There is also a probability that the person’s SIM card may not be inserted properly. This is the other main cause of the call not reachable problem. These errors will occur until SIM gets inserted properly in the place.

have you ever thought about that Are Photos Stored On Sim Card?

What To Do If I Face The Number You Are Trying To Call Is Not Reachable Error?

The “the number you are attempting to contact is not reachable” message is irritating. While there are other ways to prevent this, you may also try the following remedies to resolve call not reachable problem.

Whatever sim you are using here are All Sim Number Check Code lists that help you to know various information.

I hope you’ve figured out why things like “the number you are trying to call is not reachable” happen. If you still have any other doubts then you may ask us through the comment section.

There is also another query that we received on the social media group that is If I Put My Sim Card In Another Phone What Will Happen, to know about this, you have to read our other blogs.