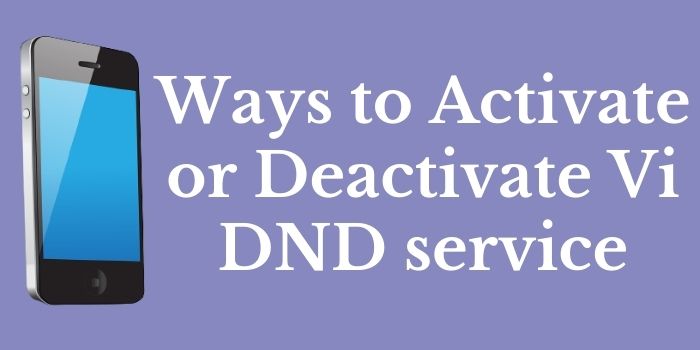 Vi or Vodafone Idea is getting popular day by day and also has a very good user base. It offers various kinds of user support services and DND service is one of them. This is amazing can save you from irritating or unnecessary calls and SMS. Here we will tell you how to easily activate/deactivate DND service in Vi. We will also tell you about the Vi DND activation code that you can use to activate or deactivate this service. So, read this complete guide if you want to know how to activate DND service in Vi along with the method of deactivating it.

What Is The Vi DND Activation Code 2023?

The Vi DND activation number is 1909. Using this number will help you to both activate or deactivate the do not disturb service with Vi. So, use this code if you want to avail of this service of Vi.

What Is DND Service in Vi?

There is no doubt that since Vodafone and Idea have together come as Vi, they have improved the quality of their services to a great extent. However, the frequent promotional calls and SMS from telemarketers might feel to be irritating. And many of you might also want to be get rid of these calls and SMS. The Vi DND service will help you in doing the same.

DND (Do Not Disturb) service in Vi is a way, through which a user can restrict these telemarketers from calling or texting him. This is an amazing service and most of the time you don’t have to pay anything for availing of this service. Through this Vi DND service article, you will get to know the simple ways of Vi DND activation along with the methods of deactivating it.

As mentioned earlier, Vi allows its users to get rid of the promotional message and calls, both from third parties companies and Vi. Below we have provided a complete guide to either activate or deactivate the Vi DND service.

How to activate DND service in Vi? | Method To Activate Vi DND Service

First, we will have a look at the method of activating the DND service in Vi. For activating the Vi DND service, a user have to just send a text msg to the Vi USSD code 1909. Doing this will allow a user to either partially or fully block the promotional texts and calls.

How to deactivate DND service in Vi? | Method To Deactivate Vi DND Service

Method To Deactivate or Activate DND service on Vi online

If you are struggling to use the DND service number of Vi then you can try using its online method. Vi also provides an option for users to register for the DND service online. For that, a user has to just visit the Vi DND page. Reaching there, sign-up with all necessary details. Once signing up is completed, you will soon receive a confirmation message that your Vi DND service is activated.

This method is quite easy and can be done within a few minutes. The only limitation of this method is that for using it, you may need to have a smartphone along with an active internet connection.

FAQs: How to Activate or Deactivate DND Service in Vi?

Q. What are the charges of Activating Vi DND service?

This service is completely free and for it you will not be charged anything.

Q. How much time does it take to Activate or Deactivate Vi DND Service?

Once you have received a confirmation message from Vi, your DND service will get activated or deactivated within 24 hours.

Q. What if I receive the promotional message even after the Vi DND service is activated?

If you still receive promotional messages even after the activation of the DND service then you can register a complaint against that telemarketer. For knowing more about it, you can click here.

Q. Who can use this Vi DND service?

Any person, residing within India can use this service for getting rid of telemarketers.