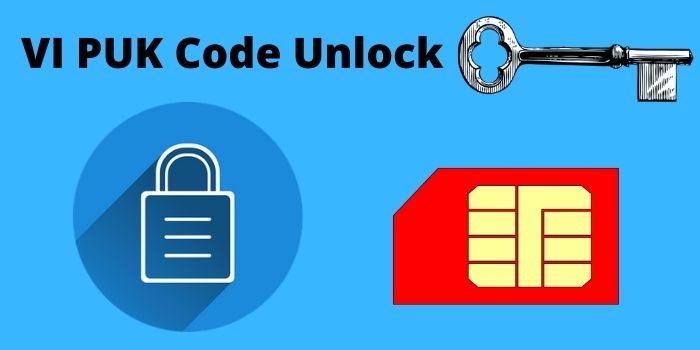 These days, getting your sim blocked by your kids is a normal problem. So if you are a Vi sim user and facing the same problem as we mentioned here then wait. By using Vi PUK code 2023 you can get rid of these issues. This code will let you unlock your Vi sim with so ease without losing your sim card. So let’s get started and know what the vi sim unblock number is.

The Vi Puk Code 2023 is (Personal Unblocking Key) 8 digit number that you need after putting your PIn wrong for 3 times. A pin is a number that secures your sim card from unauthorized use and by default it is set as 1234 which you can also change on your own. But unfortunately, if you forget this code and put it wrong 3 times then you need a 8 digit Vi Puk Code number to unblock your sim.

How Do I Find My PUK Code VI?

To get your Vi sim PUK Code you can call on its 199 IVR toll free number. By following all the instructions properly you can easily get your PUK code of Vi sim. However, if you have lost your sim card then you can also block it easily. Just simply visit the block your sim page of Vi company site and they will introduce the method to block Vi sim.

Can I Unblock My Sim Without Vi Puk Code Unlock Number?

If you have put your pin wrong continuously for 3 times then there is no way to unblock it on your own. Now you have to visit your nearest Vi help center in order to get the solution to your problem. But if you have a chance to put your Vi sim pin then try the default pin “1234” first to unlock it.

Can I Get Vi Sim PUK Code From Customer Care?

According to our team research, you cannot get your sim unlocked by Vi customer care service. Without using the 8-digit PUK Code Vi you will be not able to unblock your sim of Vi telecom company. So visit your nearest help center as soon as possible or call 199 IVR to get your personal PUK Code for Vi sim.

Can I get Vi Puk Code Unlock By SMS?

As we have mentioned above your VI Puk Number is a code that you need as a backup password after your wrong pin. To get your Vi Puk Code unlock number you have to dial 199 and follow the IVR instructions.

However, there are also other companies providing PUK code by SMS. You can easily get an Airtel PUK code or JIO PUK Code with so ease on SMS.

Unfortunately, the Vi telecom company does not provide PUK code service on its mobile application. Even though users are not allowed to get their Vi Puk code online or from any site. So the only option you have left is dialing 199 and following the IVR instruction.

How To Unblock Vi SIM Online?

To unlock your Vi SIM online, just Open Vi App > Login With Your Number > Open Your Profile > Look For Lost And Find Option > Enter your Details There > Get Your Vi PUK Code. These are the simple steps that you should follow to unlock Vi SIM by online method..

Can I Use Others PUK Code Vi of Other Users To Unlock My Sim?

The answer to this question is no. Users have to get their unique 8 digit Vi Puk code from the company. This code cannot be used by others and any Vi sim user to unlock their sim after putting their pin wrongly.

So as a summary if you see it then Puk code for Vi sim is a number used for vi sim unlock. It is a 8 digit number required to unblock your sim if you put your pin wrong 3 times. You can get it by dialing 199 and following its instructions or you can also visit your nearest Vi store.