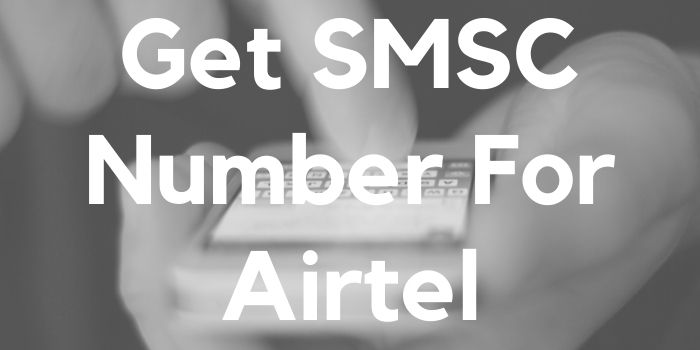 Airel is a very popular telecom brand in India and has also its presence outside India. There are various types of customer support services that it offers for the convenience of its users. SMSC number for Airtel is one of those services with the help of which, you can easily get rid of Airtel message not sending issue. Here, in this guide, we will tell you more about the Airtel SMS center number. We will also tell you about the SMS number for Airtel for both Indian and international users.

What Is Airtel Message Center Number?

The Airtel SMS center number is 9810051914 if you reside in Delhi. SMSC refers to the short message service center number of Airtel. This number is primarily used for telecom operators to provide SMS service to their users. With the help of this number, Airtel routes and forwards all the messages to their desired locations. So, if you are facing any issue in sending messages with your Airtel SIM card then you can use this Airtel SMS centre number to fix this issue.

List Of All Airtel Message Center Number For Indian Users

So, these are the major service center number of Airtel. You can use any of these numbers according to your location to get your Airtel SMSC number issue resolved.

Apart from Indian users, Airtel also provides server center numbers for its international users. Now, let’s have a look at those numbers that you can use for the same purpose:

So, these are the major message center number of Airtel of the region outer than India. All these numbers that we have shared are tested and 100% working. You can use them to get your issues related to the Airtel message center fixed.

How To Get SMSC Number For Airtel?

It is also very easy to get the Airtel SMS center number according to your region. For this, you just need to dial the *#*#4636#*#* from your phone’s calling app. Doing this will show you some options, now select the desired options to know what your SMSC number for Airtel SIM card is.

How To Update Airtel SMSC Number?

It is very easy to reset or change the message center of your Airtel SIM. For this, you just need to go through the following steps:

So, these are the simple steps that you need to follow to change or reset the current message center number of your Airtel SIM.

How To Find SMSC Number Airtel?

To find what your SMSC number is, you just need to dial the number *#*#4636#*#*. Apart from this, you can also dial any of the numbers that we have mentioned above according to your region.

What Is The Message Center Number iPhone?

What Is The Carrier SMSC Number For Airtel?

What Is The Airtel SMS Center Number Uttar Pradesh?

The Airtel Message center number for all the users residing in Uttar Pradesh is +919810051914. With the help of this number, you can fix the message not sending issue.

What Is The Airtel SMS Center Number Maharashtra?

The SMSC number of Airtel for Maharashtra is +919898051916. Using this number will help you to easily solve your message not sending issue.

If you are also facing issue in the Airtel Internet then change Airtel apn settings 4g.

If you are a BSNL user then you can also check out the BSNL Message center number to get your message not sending problem fixed.