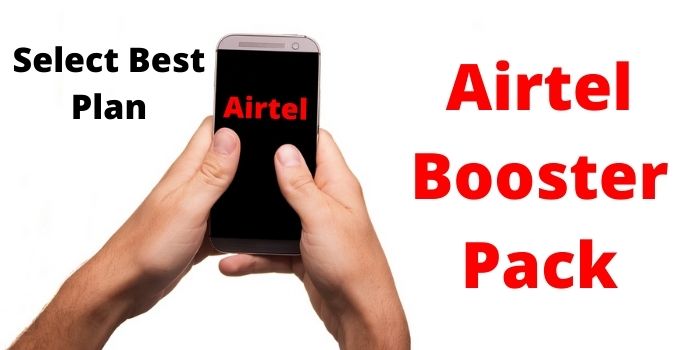 As every person spend lot of time online every day. Some of them play an online game or stream Netflix or YouTube which may lead to shortage to data pack (if have daily data limit). As generally, Users recharge with Airtel daily data limit plan of 1GB or 1.5GB, which quickly exceed the data limit before the day ends. Data booster packs help greatly in this situation. In this, blog post we focus on Airtel booster pack to remove shortage of Net of any Airtel user.

Also know, about what is Airtel Rs. 23 Recharge Plan is.

These are the best plan to increase Airtel daily data limit. The above Airtel booster packs can be recharged online using the Airtel thanks app.

The most demandable plan is of Rs.89. With this user get additional 6GB of Net pack and Prime Video Mobile Edition + Free Hellotunes service till existing validity.

For its prepaid customers, Airtel has announced two new data plans. The data ad-on plans cost Rs. 78 and Rs. 248 respectively. Wynk Premium is also available for free with both subscriptions. Previously, the telecom provider introduced the Rs. 89 Prime Video Mobile Edition subscription only. But as of now, the company also offers free hellotunes service to its users.

Airtel has announced a new broadband bundle that includes 30GB of data. It has a 28-day validity period. However, the Rs. 401 pack’s biggest plus point is that it includes free membership to Disney+ Hotstar VIP. So, with the Rs. 401 recharge plan, you receive a complimentary Hotstar VIP membership worth Rs. 399. This booster pack is an excellent choice for your data needs thanks to the Airtel Hotstar deal. You must have to use this airtel booster pack recharge plan.

You may use the Airtel Thanks app to activate your free membership once you recharge with a Rs. 401 pack.

The most lowest price Airtel booster plan is of Rs. 48 package which includes 3GB of high-speed net connectivity. There are no voice or SMS benefits included in the plan. It is most cheapest net pack available for Airtel customers. Previously, this pack’s validity was 28 days. The validity of this plan has now been removed by Airtel. The validity is now the same as your current plan. So, you can enjoy the package till your current plan last.

For its prepaid customers, Airtel has also announced a new Rs. 251 data plan. The Rs. 251 booster plan includes 50 GB Net Data. It’s a data package with no expiration date and no voice features. Those who love to stream or play game online unlimited times, this plan suits them best.

You may also read: 23 Rs Recharge In Airtel

As, for watching IPL, T-20, ODI, Test Series of Indian Team, Airtel has introduced three new recharge options for its customers. All three options include a Disney+ Hotstar VIP membership. The Rs. 448 includes 3GB of data every day for a total of 28 days with unlimited calling benfits. The Rs. 599 net plan, includes 2GB of data limit for each day for 56 days. There’s also a Rs. 2698 plan that gives you 2GB of data each day for a year.

You can also apply for the Airtel Free Data Code , if you are eligible for this, you will get the free data for usage.

How can I check the balance of my Airtel Booster Pack?

Which data plan is best for Airtel customers?

The users decide which data bundle to use. For those who need less data, the Rs. 48 bundle is the ideal option. However, heavy data users should choose plans that include data. For example, the Rs. 98 bundle provides consumers with 12GB of high-speed internet.